Watch Video: 2 Punjab residents give Rs 9.12 lakh to Kashmiri man after apple cartons are stolen from his truck 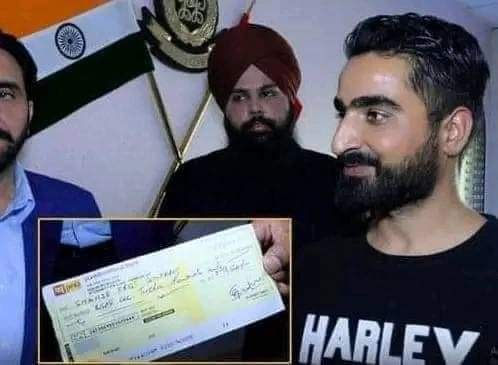 2 Punjab residents give Rs 9.12 lakh to Kashmiri man after apple cartons from his truck stolen

Chandigarh, Dec 5: Two samaritans from Punjab on Monday came forward to help a Kashmiri man whose cartons of apples were stolen after his truck overturned in Fatehgarh Sahib district.

Rajwinder Singh from Patiala and Gurpreet Singh from Mohali gave a cheque of Rs 9.12 lakh to Shahid, a resident of Sopore in Baramulla district of Jammu and Kashmir, to compensate for the loss he suffered.

As many as 1,200 cartons of apples were stolen by villagers and passersby after the fruit-laden truck overturned on the Delhi-Amritsar highway in Fatehgarh Sahib district on Saturday.

The truck was coming from Srinagar and heading to Bihar.

The video of cartons of apples being taken away went viral.

Rajwinder Singh and Gurpreet Singh approached the police and expressed their wish to compensate for the loss to the owner of the truck.

Rajwinder Singh said he could not believe that some people were busy stealing apple cartons instead of helping the truck driver who met with an accident.

It was quite an unfortunate incident which took place in Punjab, he said.

“We wanted to give a good message of Punjabiyat to people,” said Rajwinder as he stressed that people should come forward to help those in need.

Gurpreet Singh said the cheque of Rs 9.12 lakh was given to the truck owner.

Truck owner Shahid said he felt very bad when he saw the video of apple cartons being stolen, not believing that it could be Punjab where people always come forward to extend help.

He said he had studied in Punjab and knew that people here are known for offering help.

He thanked the two samaritans for giving him Rs 9.12 lakh cheque.

Senior Superintendent of Police, Fatehgarh, Sahib Ravjot Grewal said a case has been registered in connection with the stealing of apples and 10 people have been arrested in this regard.