The result of the Common University Entrance Test (CUET UG Result 2022) for undergraduate (UG) admissions in colleges and universities are likely to be announced in early September.

The exams are being conducted by the National Testing Agency (NTA).

The examinations, which are being held in six phases due to several instances of technical glitches leading to postponement and cancellation, started on July 15 and will end on August 30.

The  CUET UG Result 2022 will be released on the website of NTA.

Along with this, the results will be sent to various concerned Central and other universities. The universities and colleges will release the cut-off list on the basis of this result after which the new session of the first year will start in the colleges. 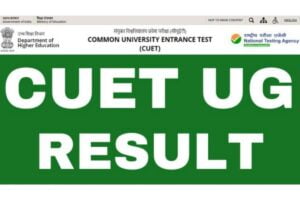 Around 6.31 lakh students have appeared in the CUET-UG examinations so far in 3 phases.

CUET UG Result 2022 – Admit cards are being issued to the candidates for the CUET-UG examinations` fourth phase scheduled on August 17, 18 and 20. A total of 3.72 lakh candidates will appear in this phase.

According to UGC chairman M. Jagadesh Kumar Kumar, most of the candidates have been given cities of their choice.

However, there are around 11,000 candidates who could not be given the cities of their choice, and have been shifted to phase 6.

The candidates who could not appear in phase 2 held on August 4, 5 and 6, either due to technical reasons or due to cancellation of the centre, will be allowed to appear in phase 6 examination to be held from August 24 to 30.

The admit card to these students will be issued on August 20.