Jammu and Kashmir administration gave the indication that the government is changing the education session from November to March. The only reason given for the change in session from November to March is that it will bring uniformity in the education schedule; no other reason or data is in public domain in support of the proposed policy decision.

The only best thing that has happened is that it generated a debate for and against, both in print and social media, and also in our homes and work places, as almost all households have school going children. What does this change in educational session actually mean has to be clarified for the benefit of all concerned including children for whom this change is being brought.

Uniformity in Academic Sessions: It only means that the children will appear in the examination in the month of March-April instead of November–December, and the admissions to the new classes will now be made after the result is declared some times in June-July instead of December.

But is it not the same in plain regions of Jammu which have sub-tropical climatic conditions. November – December session of examination and admission to new classes is only in hilly and cold regions of J & K that have temperate climate.

In plain areas of Jammu harsh hot climate followed by monsoon starts immediately after examination of children in March – April, while the Board prepares for the declaration of result of students and the schools remain closed, and children remain in homes due to holidays for about three months(Uniformity in Academic Sessions). Same is the case for cold regions of Kashmir and Jammu, where harsh cold period starts towards end of December and continues till about 2nd week of March.

During this period schools and colleges remain closed and children remain in houses to tide over the cold spell, while Board of School Education prepares results.

There is no wastage of time, in any case the schools have to be closed for about three months due to hot climate in Jammu plains, in May-July, and in Kashmir due to extreme cold from late December to March, which is used to prepare for declaration of results.

In case Kashmir and other winter zone schools are brought at par with Jammu plains, the students will lose three months of active studies as the winter sets in, when the temperature remains about -50 C to 100 C, with reduced visibility, and smaller days(Uniformity in Academic Sessions). It is not possible to keep schools open during winter in Kashmir and other cold regions of J&K, as we do not have required infrastructure in our schools.

A proper analysis of advantages and disadvantages of shifting the session from Nov – December to March-April needs to be conducted by the experts from the education sector. Instead of discussing about when the examination of children has to be conducted, we need to take a closer look at our education sector and identify our weak areas in it(Uniformity in Academic Sessions). A cursory view of our educational sector indicates:

With about 1.5 lakh teachers and support staff in our school education system, majority of our school pass outs, especially from rural government schools, cannot read or write property in English, have not learnt basic skills of math, nor developed basic concepts of science, art, language or literature.

We have about 10, 000 teachers and support staff in our colleges and universities. The children coming out of colleges and universities have not developed fine life skills, including reading, writing, and analysis, even from the stream they have graduated, or acquired masters degrees(Uniformity in Academic Sessions). There are exceptions, but this holds true to the majority.

The reason for such a colossal wastage of our human capital and resources is that our education system is not oriented to minimum learning standards, which means what we expect the 8th, 10th, 12thclass, a graduate or a post graduate knows about a subject or subjects he has passed.

While the child may have earned qualification, on the basis of pass %age of marks, it does not indicate that he has learnt the subject he has spent years in learning.

We can dismiss above statements, as they are not supported by any data. In absence of a mechanism of minimum learning standards, or a quality certification like ISO 1900, TQM, or any other quality control mechanism for our schools, colleges, universities, engineering, skill colleges and for pass outs from these institutions, it is possible to say that above statements may be near to what is said above.

There is other way of looking at how our education sector is performing. The population of J & K is about 1% of the population of the country, we normally should have 1% representation in IAS and allied services, judges in all ranks, officers in the armed and security forces, in industry, trade and service sectors etc(Uniformity in Academic Sessions). But we are nowhere visible. 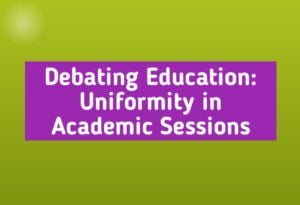 Does it mean that we are not giving quality education to our children or our institutions responsible for education are not delivering(Uniformity in Academic Sessions).

Only sector we have done comparatively better is health sector; we have produced good number of doctors. The reason in my opinion is that our medical colleges are associated with hospitals, which in turn are associated with Medical Council of India, which is associated with world health organisation(Uniformity in Academic Sessions). Can we copy this model in other sectors of learning like engineering and degree colleges, universities, arts and science disciplines and sectors of wealth and employment generation where ever possible.

To know about the health of our education, let me add: I have seen M. Tech. Civil Engineering boy working as orderly in a government high school, B E computer science setting up diary unit, Ph.D. Economics applying for class 4th post(Uniformity in Academic Sessions). What a fall! There is a need to measure and quantify our under performance in education and skill development at the earliest (Uniformity in Academic Sessions) in case we have to survive the catastrophe.

All the material progress that we see in the world from the days man learnt agriculture to present day has been possible due to his acquiring of knowledge and skills which created jobs for the people and brought comfort to all.

Human beings have inherent capacity to make this planet even more beautiful, the only condition is we have to give proper education and skills to our children. Our children can also dream of getting Noble Prize at some time in future but we have to plan for that now(Uniformity in Academic Sessions).

The author has worked as National Resource Person for livelihood and National Level Monitor for evaluating different schemes of MORD GoI.

Disclaimer: The views and opinions expressed in this article are the personal opinions of the author.

The facts, analysis, assumptions and perspective appearing in the article do not reflect the views of GK.