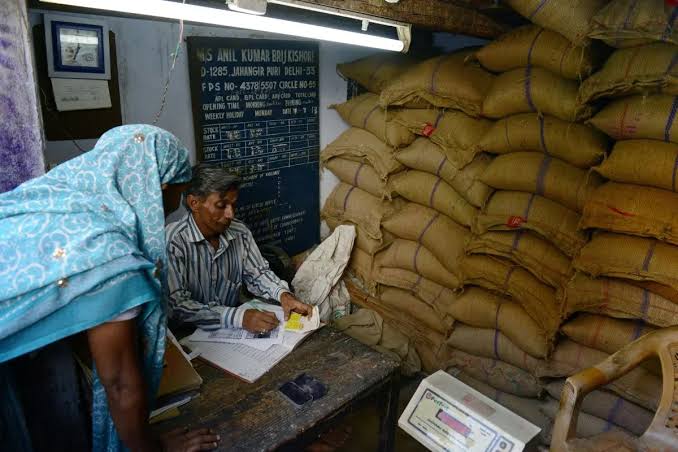 Srinagar, Jan 16 (KNO): In an important move aimed at ensuring food security, the Government of India has announced distribution of foodgrains, free of cost to NFSA beneficiaries (AAY & PHH) from 1st January 2023.

In tune with the Central Government’s decision, J&K’s Department of Food, Civil Supplies & Consumer Affairs (FCS&CA) has commenced free distribution of food grains (rice and wheat) to AAY and PHH beneficiaries from 1st January 2023 across Jammu & Kashmir. The authorities at the helm of affairs in the Department have issued instructions to the field officers, NIC Team and Technical Teams to incorporate the fresh changes in IT system, e-POS applications and PDS so as to ensure free of cost distribution of rice and wheat to AAY & PHH beneficiaries under NFSA in J&K from 1st January 2023.

“While distribution of rice and wheat would be absolutely free, Rupee 1 would be charged for wheat flour per kg as conversion charges, with applicable conversion loss, where wheat flour is provided to beneficiaries instead of wheat,” an official of the Department said.

He said the beneficiaries are also advised to obtain printed e-PoS receipts, clearly indicating free distribution of rice and wheat, along with their entitlement.

“This benefit is exclusively for AAY and PHH beneficiaries and the rate and scale shall remain unchanged in respect of Non Priority Households”, he maintained. He said as PMGKAY has been discontinued by the Government of India from 31st December 2022, so additional free rations at a scale of 5 kg per beneficiary per month as were made provided earlier, cannot be provided in respect of AAY and Priority Households now but has been substituted with free ration under new scheme “But while discontinuing PMGKAY, the foodgrains provided to these two groups earlier under NFSA at Rs 3/ kg rice and Rs 2 / kg wheat, have now been made absolutely free for AAY & PHH beneficiaries,” he said.

Responding to the reports appearing in certain sections of the media that there is dearth of rations in J&K and the foodgrains earlier being provided under PMGKAY have been stopped, the FCS&CA official made it clear that earlier free foodgrains at a scale of 5 kgs per beneficiary per month were provided to AAY and Priority Household (PHH) beneficiaries for nearly two years under Government of India run scheme– PMGKAY, which has now been discontinued by the Government of India..

The official said that additionally, a J&K Government run scheme by the name, Jammu Kashmir Food Entitlement Scheme (JKFES) was also under implementation in J&K upto July 2022, under which a top up of 5 kgs per beneficiary was also provided to PHH and Non-Priority Households, subject to a ceiling of 35 kgs per household. “The foodgrains for this scheme were sourced from Open Market Sale Scheme (Domestic) OMSS-D, implemented by the Government of India/ FCI,” he said adding that OMSS-D Scheme was stopped by GoI in respect of wheat in April 2022 and consequently the Department switched over to distribution of rice only under JKFES till July 2022.

Further, OMSS-D scheme was stopped in respect of rice also by GoI during July 2022, as a result of which there was no scheme to source foodgrains for JKFES beyond July 2022.

“Consequently, JKFES has been in abeyance because of non-availability of foodgrains under the scheme,” he said and added that the Government of India, subsequently, restored the OMSS-D scheme with a rider that the States/UTs could only lift 10,000 MTs from July to December, 2022 under the scheme, as a special case. This quantity was too inadequate to take care of requirements under JKFES even for a month, where prior to stoppage of the scheme, the Department would need an allocation of about 24,000 MTs a month, to run JKFES. OMSS(D) still has not been restored by the Government of India/ FCI, so the Government of J&K is not in a position to consider the revival of JKFES at this stage.

The official said that it has been reported by certain individuals in media that the allocation of foodgrains has come down in Jammu & Kashmir since 2021. “In an effort to made PDS credible and transparent, the Department undertook accelerated Aadhar seeding in a mission mode, consequent to which more than a million duplicate/ bogus beneficiaries were de-weeded, as a result of which the allocation that used to be made earlier, has come down,” he said and emphasized that allocation of each and every eligible beneficiary as per norms is ensured every month. “While AAY households get 35 kgs of foodgrains per Ration Card, the beneficiaries in PHH category and NPHH get 5 kgs per beneficiary per month,” he maintained and added that during this period more than 68,000 eligible households were also brought under the ambit of PDS. The department has already instructed both the Divisional Commissioners to identify left out eligible beneficiaries, if any, who are still required to be brought under the ambit of PDS, so that they too are included.

The official said that the Department has allocated 34593 MTS of foodgrains for AAY and PHH families for the month of January, 2023, after including savings of 1730 MTs of previous month. Besides, 9366 MTS have also been allocated for Non-Priority Households to provide them foodgrains. The Department has sufficient stocks to meet the requirements of AAY and PHH categories under NFSA and Non-Priority Households under NPHH category, as per their entitlement. Additionally, the Department has already dumped sufficient stocks in winter dumping areas to take care of AAY, PHH and NPHH beneficiaries in those areas which remain closed during winters. As a special concession, the beneficiaries living in such areas have an option to lift their entitlement in advance for four (04) months. This facility was extended to them in a month of December only, so that they are not required to come to Sales Outlets for collection of their entitlement every month during winters. However, in order to ensure that transactions remain transparent, all such transactions are automated.

The official reiterated that the Department is committed to provide the entitlement to each and every AAY & PHH beneficiary under NFSA and to Non Priority Households, as per norms in a transparent manner, towards which it has achieved 100% automation through installation of PoS devices in all Sale Outlets and has also achieved an Aadhar authentication rate of about 93%, which implies that 93% transactions are made by bonafide beneficiaries through Aadhar authentication—(KNO)