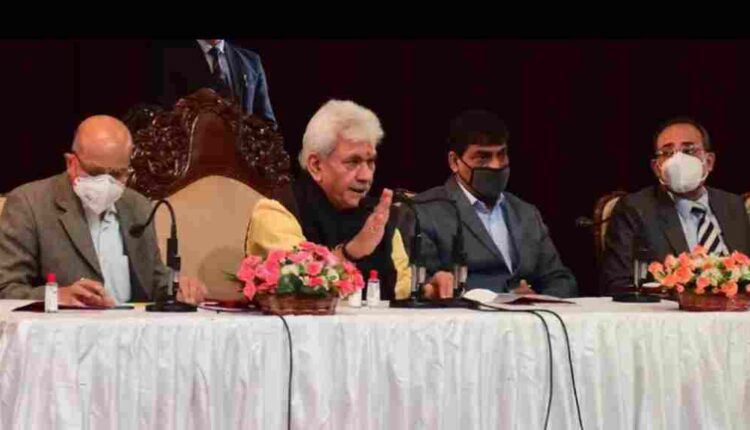 Govt aiming to provide loans to 50,000 youth to reduce unemployment

Lieutenant Governor Manoj Sinha Tuesday said that since he took over the reigns of Jammu and Kashmir last year, the unemployment rate has reduced to 10.6 percent till this June with various youth centric initiatives.

In an interview with national news channel CNN NEWS 18 on the sideline of laying of foundation stone of the Shri Amarnathji Shrine Board (SABS) office and Yatri Niwas at Srinagar, Sinha said that under the Mission Youth programme, around 20,000 youth were provided self employment loans which has brought down the unemployment rate in Jammu and Kashmir.

“Last year, when I came to Kashmir the unemployment rate was 19.6 percent which as per the independent agencies has come down to 10.6 percent this June,” Sinha said. “As per the data, we are doing far better than other states of India like Delhi or Rajasthan.”

Sinha said this year, the government has set the target of providing self-employment loans to 50,000 youth to reduce the graph of unemployment in the region.

“Even we can assist upto 1 lakh youth under the Mission Youth. There is no dearth of money,” he said.

Sinha said that the agriculture and horticulture sector has a great potential to add to the economy of the region.

“So, far we have achieved 300 hectares of high density plantations. In next four years, we have a target of achieving 5500 hectares. It won’t be limited to apple only, many other fruits would also be included in it,” he said.

Sinha said that this year, Rs 12,600.58 crore District Capex Budget was announced for Jammu and Kashmir which is more than double since last year.

“The allocated budget has also been disbursed and in comparison to last year when the district capex budget was Rs 5160 crore, this time it is Rs 12600 crore,” he said.

ALSO READ:  Except For 10th And 12th Standard, Schools To Remain Closed In J&K

Terming the establishment of New Yatri Niwas as a historic moment, Sinha said that the project would be completed in a time bound manner to facilitate the yatris.

On the launch of Film Policy-2021, Sinha said that the policy has been launched after having consultation with all the experts and he is confident that the move will bring the old tradition of film shooting back to the Valley. (Rising Kashmir)