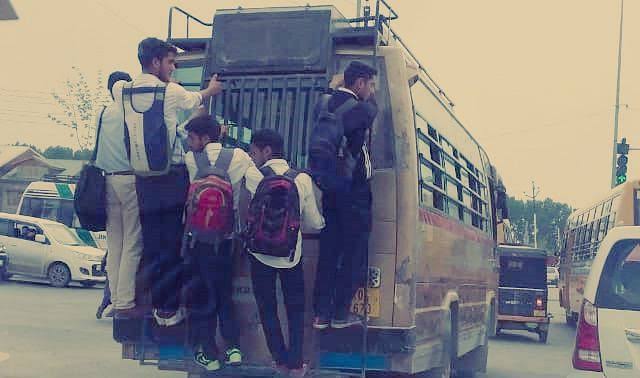 Srinagar: On the day the Srinagar administration launched a crackdown against the students bunking schools, officials said the situation was grave and was being tackled with an iron fist to ensure students attend classes.

Read | It is Official: Exam session to be March now for class 10th, 12th – check details

Talking to Greater Kashmir, ADC Srinagar Haneef Balki said that the students had set a bad trend of bunking classes which was detrimental to their careers.

“We found students, mostly from schools, freely roaming in parks and other spots. It is not a healthy sign at all. The practice has to be stopped for the larger good of the students,” he said.

Meanwhile, an official said that majority of the students were from schools.

“Though there were some students from colleges, majority of them were from schools that too from middle and secondary classes,” the official said.

He said that the situation had become worrisome as girls were also bunking classes and spending their day at parks and other spots.

“The situation is grave and it has to be tackled with an iron fist to ensure students remain inside classes,” the official said. “Not only Srinagar but students hailing from other districts too were caught roaming in parks.”

He said that it had been learned that students from other districts take coaching classes at private coaching institutes in Srinagar during morning and afternoon hours and spend the rest of the time in parks instead of attending their schools.

The famous Jhelum View Park along the Bund and other resting spots around Polo View in Srinagar city have become favourite spots for school-going students who bunk classes.

Every day scores of students in uniforms are seen roaming idle or sitting in groups inside parks and playgrounds near Polo View during school hours.

The students from different nearby schools reach Jhelum View Park and other nearby spots to spend their day after bunking classes.

Also, the students are seen roaming in Pratap Park during school hours, raising questions about the administration of schools.

In the past, the schools would rusticate students who would not attend their classes for seven consecutive days.

However, the practice was later done away with as the move would result in a decrease in enrollment.

“If the students are rusticated from schools, the authorities in the School Education Department raise questions over decreasing enrollment in schools,” said a school head wishing not to be named.

Students including girls roaming in parks and other resting spots during school hours have become a cause of concern among the stakeholders who demand that school authorities, civil and district administration besides the parents should collectively play a role to stop the nuisance.

The stakeholders also demanded that the concerned district administration should set up a special task force and deploy them around these parks during school hours.

“The move will discourage students from bunking classes,” he said.

Over the years, J&K Police would deploy Flying Squads and Police personnel at various spots.

The squads would not allow students to roam in parks and other spots during school hours.

Meanwhile, ADC Srinagar said that the drive against children bunking school would continue to curb the menace.

“We can’t control it alone. There has to be a proper mechanism from the Education Department as well. And, importantly, parents have to play their role as well,” he said.

In April this year, Director of School Education Kashmir conducted a surprise visit to a school in the Ganderbal district only to return disappointed after witnessing the unexpected trends going on in schools.

During his surprise visit, the director saw teachers sitting idle while the students were seen roaming in markets in the nearby areas.

He expressed his displeasure over the incident and dispatched a note to the concerned principal of the higher secondary school seeking an explanation for the indiscipline in the institution. The director in his note said that on the day of inspection, the entire teaching staff was sitting idle on the school premises while students were seen roaming in the market.