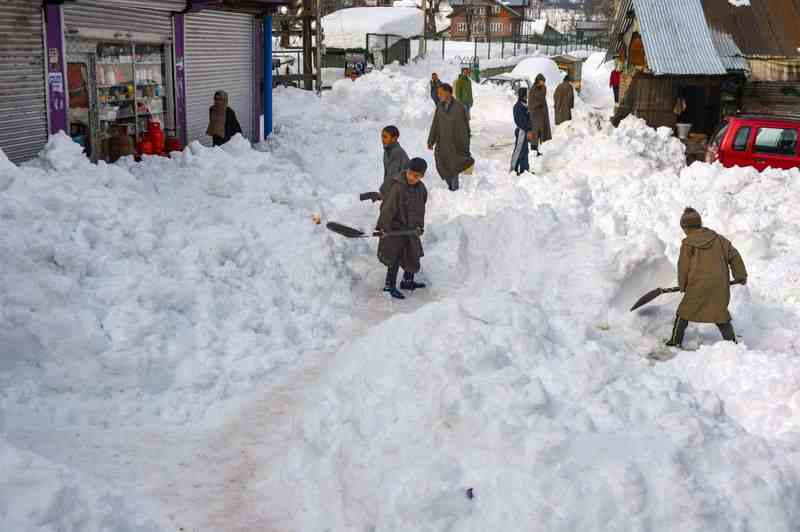 Srinagar: Amid slight ease in sub-zero temperatures on Thursday, Kashmir Valley is bracing up for two approaching wet weather systems which are expected to bring light to moderate snowfall from Friday evening to Saturday and from December 12-13.

“Cloudy weather with intermittent light to moderate rain at many places of Jammu and plains of Kashmir is expected on December 9-10. Light snow (1-2 inches) likely (50% chance) in plains of Kashmir during 9th Night-10th Forenoon whereas higher reaches may receive 9-10 inches of snow,” a meteorological department official here told GNS.

While there is no forecast of any major snow during this spell, the MeT official said that there may be temporary disruption in surface transportation over Sinthan Top, Mughal Road, Razdan pass, Bandipora-Gurez, Zojila during December 9 -10th when a fresh Western Disturbance is likely to affect J&K and adjoining areas.

A feeble WD is also expected to hit J&K on the night of December 12 and 13. There is a possibility of snowfall over higher reaches under its influence in Kupwara, Bandipora and Ganderbal, he said. Dry weather is expected thereafter till November 18, he said.

Meanwhile, Srinagar recorded a minimum of minus 2.8°C against minus 3.0°C on the previous night, he said. So far the coldest night at minus 3.4°C this season in the summer capital was recorded on December 5.

While there was also special weather phenomenon of mist this morning, the MeT official said, today’s temperature was 2.2°C below the normal for this time of the year in Srinagar.

Qazigund recorded a low of minus 3.0°C against minus 3.6°C on the previous night. The temperature was 2.2°C below normal for the gateway town of Kashmir, he said.

Pahalgam recorded a low of 3.6°C against season’s coldest night at minus 5.6°C on previous night and it was 0.4°C below normal for the famous tourist resort in south Kashmir’s Anantnag district, he said.

Kokernag recorded a low of minus 1.8°C against minus 1.9°C on the previous night and it was 1.1°C below normal for the place, he said.

In Kupwara town, the mercury settled at minus 2.5°C against 3.1°C on the previous night, the official said. It was 0.7°C below normal for the north Kashmir place, he said.

In Ladakh, Leh recorded minus 8.2°C, Kargil minus 12.1°C and details regarding mercury in Drass, the world’s second coldest place after Siberia, were not immediately available, the official said. (GNS)