After NTA declares the NTA NEET UG 2022 Result, they will be receiving an All India Ranking (AIR) which would be based on the marks received by them. Admissions to various colleges are done based on these ranks.

NTA NEET UG 2022: NEET Result 2022 is expected to be declared in the third week of August.

NEET Result 2022 is expected to be declared in the third week of August. NTA will also release the OMR sheet of candidates who appeared in the NEET UG 2022 exam.

The NEET UG 2022 exam was conducted on July 17. A total of 18.72 lakh candidates registered for the NEET UG exam, out of which 95 percent candidates appeared for the exam. 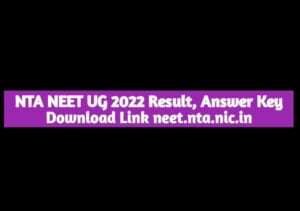 Once the NEET answer key is released, candidates will be able to challenge the responses by paying a non-refundable fee of Rs 200 for each objection.

NTA NEET UG 2022 ranks are used by central and state bodies to hole 15 per cent of all India quota and 85 per cent of state quota counselling. In the case of MBBS, Medical Counselling Committee (MCC) hosts AIQ NEET counselling on mcc.nic.in.