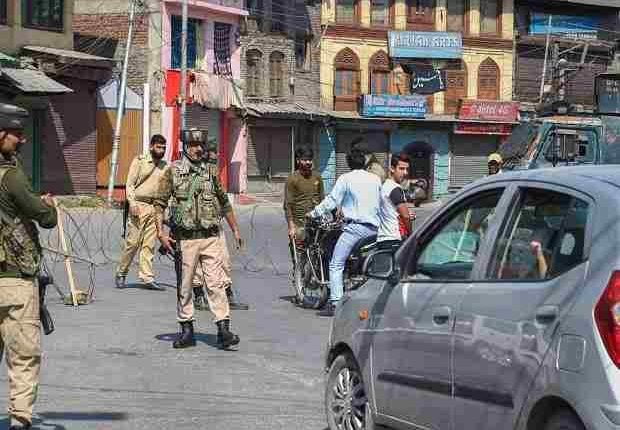 Srinagar, Sep 4: Restrictions on assembly of people remained in force in most parts of Kashmir on the third consecutive day on Saturday after the death of separatist leader Syed Ali Shah Geelani.

Officials said that the day passed off peacefully and they were planning to restore cellular internet services on Sunday late afternoon or evening.

Geelani, 91, died at his home in Srinagar on Wednesday night after a prolonged illness. The separatist leader, who spearheaded separatist politics for over three decades, was buried at a mosque near his residence during the same night.

Soon after his death, as a precautionary measure to avoid any law and order situation, curbs were imposed in most of the places across Kashmir, officials said.

Meanwhile, sources said that strict curbs remained in place in Hyderpora area where the security forces had erected barricades. However, the people moving towards airport were allowed after proper verification.

“Roads leading to Geelani’s residence near Hyderpora, here remained sealed with barricades put up to stop the movement of people,” the officials said. “Security forces have been deployed in strength in the city and elsewhere to maintain law and order,” they added.

Reports of restrictions were also received from Old Srinagar and other city areas. Reports reaching here from other district headquarters in south, north and central Kashmir said that curbs were eased on Saturday.

“The day passed off peacefully,” a senior police officer said here. “We are thankful that people gave full cooperation.”

Meanwhile, all exams scheduled for September 4th and 5th have been postponed by the University of Kashmir and the board of secondary school examinations.

Officials, however, said that the UPSC’s EPFO/AO exam would be held as per schedule on September 5.

Meanwhile, police in a statement said:

“Today the situation across Kashmir valley remained peaceful and no untoward incident was reported from anywhere except one minor pelting in Narkara area of Budgam.

“Several preventive measures have been taken to maintain L&O situations including preventive arrests of dozens of miscreants so far. Traffic was seen plying normally and most of the shops remained open in various parts of the valley.

“. . . the cooperation of general public helped police & security personnel deployed on ground to maintain the law and order. In view of the peaceful situation, mobile internet services shall be restored after reviewing the overall security situations while as cellular service (voice call) and broadband of all TSPs were already restored yesterday.

“IGP Kashmir appeals to general public not to pay any heed to the rumours being maliciously spread by the anti-national elements especially across the border with an objective to disturb the prevalent peaceful atmosphere in the valley.

“Several social media platform including Kashmir Media Service which are running from Pakistan have been trying to spread fake news and videos to instigate miscreants to disturb situations. Even a few local media persons and channels have been found spreading fake news. We are observing it, maintaining evidence and appropriate actions shall be taken against them. Such elements are advised not to spread fake news without consulting law enforcement agencies.

“All policemen and security forces personnel have been sensitised facilitated students appearing in different examinations.”