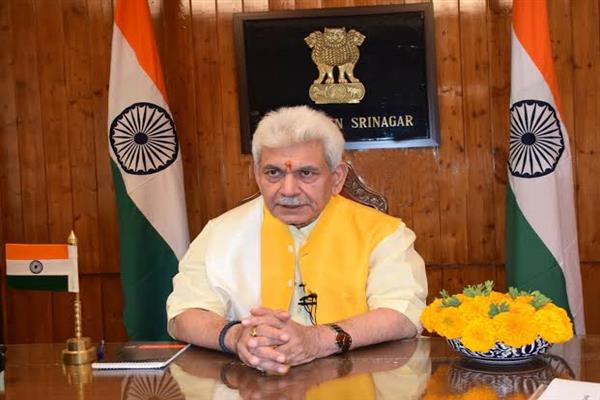 Jammu: Lieutenant Governor Manoj Sinha on Saturday stated that the biggest change brought in by his government was that the administration, which in the past was dedicated to serve few individuals or families, was working with a sole objective of the welfare of J&K people.

He was addressing a conclave organised by Gulistan news channel on “Badalta Jammu Kashmir Ladakh” here in Jammu.

“However, our march to progress and welfare of J&K is not so easy as it is strewn with a number of challenges. 47-48 percent of the total budget of J&K is being spent on the salaries of employees. Across the country, J&K has a distinction of providing the maximum employment in the government sector. This can be better understood if we draw a comparison with a state like Bihar, which has a population of 13-14 Cr, yet has only 4.63 lakh government employees. However, J&K with a population of 1.35 Cr has five lakh employees. So in such a scenario, how will we run the administration? We have around one lakh daily wagers. They were accommodated with the promise that they would be regularised after seven years of service,” LG Sinha mentioned, while substantiating his assertion with statistics.

He averred that the daily wagers were accommodated against varied emoluments or wages, even at the rate of Rs 2000 or 3000 in different departments or sectors.

“In majority of the cases, they were employed without properly constituting a selection committee only at the whims (of those at the helm of affairs in the past). I don’t deny that their demand is genuine and legitimate. Some of them (seeking regularisation) are staging a dharna. In this connection, one major step we have taken is to increase the minimum (daily) wages from Rs 225 to 300. Besides, we have constituted a committee, which will submit its report by the end of this month, to decide about the daily wagers. As per the (provisions of) Government of India, a daily wager gets Rs 500 (as minimum wages). However the states have their own parameters to decide about daily wages/wagers. So how can we move on this account? J&K has a total revenue generation of Rs 11,000 Cr. However, the past two years have seen a 25 percent increase in collections vis-a-vis GST, Sales Tax and Excise. We anticipate further increase on this account this year despite the fact that we are spending Rs 60,000 Cr on salaries, pensions, GPF (gratuity) etc.,” he said.

LG Sinha asserted that in order to infuse a change in the situation, the UT was required to increase its income, sources of revenue generation and on this account, the government needed support of all stakeholders.

He averred, “Every year, many sample surveys are conducted by the Government of India. Just a cursory glance on these surveys would give a glimpse of fast changing J&K.” Further elaborating on this account, he profusely quoted statistics.

He stated that in the past two and a half year, the forest cover had registered an increase by 6 percent

Per capita energy consumption in J&K 1394 units is against the national average of 1208 units. These 1394 units comprised an increase of 200 units in the last two years, Sinha said. J&K achieved almost 100 percent satur